Just over a week ago, I opened my email to see a nice surprise waiting for me – a digital download of The Smashing Book #3: Redesign the Web. I had previously agreed to review the book and I was excited to dig into it before its official release date. It felt a bit like peeking at your Christmas presents early, but without the whole “spoiling the surprise” part!

Wanting to be one of the first to post a review of the new release, my initial plan was to skim through the chapters quickly to get a sense of the book that would allow me to write my review. I couldn’t do it. 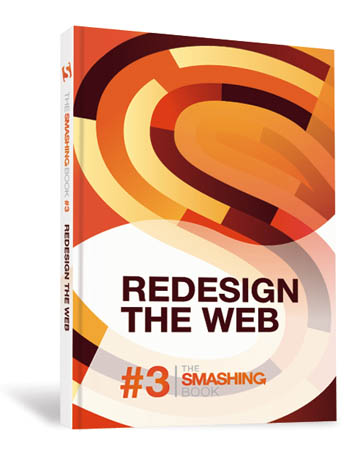 As I tried to skim the pages of the book, I instead became engrossed in each chapter. I found myself repeatedly saying, “I’ll read this chapter in full, but then skim the next few.” Once I got to the next chapter, however, the same thing would happen and I was once again unable to quickly breeze through the pages. So my review is being published a week later than I had first intended, but the trade-off is that I got to enjoy the book as a true reader rather than just a reviewer. It was worth it.

Created by the Community

The community feel extends throughout the rest of the book too. Each chapter was authored and reviewed by different members of the web design/development industry, bringing a variety of different voices to the work in a way that you don’t normally get in a book written by a single author.

This approach of multiple authors and voices can be distracting if not done right. I have read other books with multiple authors and found that, from chapter to chapter, the tone of the presentation varies so much that it becomes jarring. That is not the case with The Smashing Book #3. The editors here have done a great job creating a consistent tone through the entire book while still allowing each author to put a little of their own style into their chapter. Still, the multi-author approach, while done very well here, has some drawbacks which I will discuss later in this review. 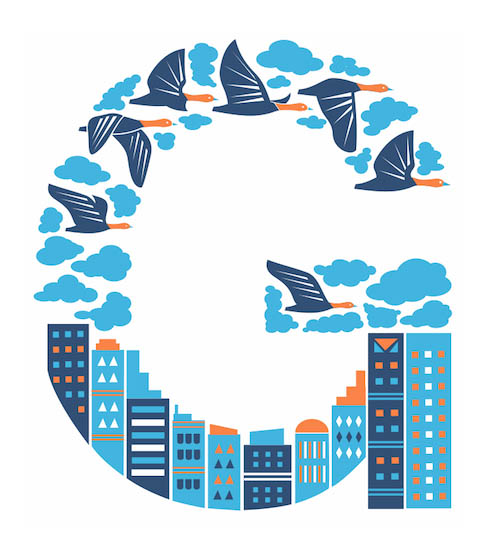 The Design of the Book

While I am reviewing a digital copy of the book, I can say that even this is very attractive to behold and I can only imagine that the physical book will be even more so. Each chapter starts with a large illustrated letter, designed by Kate McLelland, that incorporates visual elements that begin with that same letter. For instance, Chapter 5 – “Javascript Rediscovered” by Christian Heilman, begins with a large “G” that has illustrations of geese in it.

If you put all the large letters together, they spell out “Redesign the Web”, the title and theme of this book. This is a nice touch that I actually didn’t realize at first, but when I did, I was delighted by the find.

While the design of the book is certainly nice, it is really the content we have come here for. Just like the success of a website is largely tied to the quality of its content, the value of this book is also dependent on its content and the authors and editors have delivered a quality book worthy of space on your bookshelf.

Many of the chapters, such as those on HTML5 or CSS3, start with some basic information that has, quite honestly, been covered in depth in a number of other places. While you may be tempted to dismiss these chapters as information you already know, give them a chance, because they get through the basics quickly (and those in the industry that have not been fully exposed to that basic information yet will be thankful it is included). Once those basics are covered, these chapters do offer plenty of information I have not seen covered exhaustively elsewhere, such as working with WAI-ARIA roles, font sizing with rem, flexbox, and much more.

Chapter 4 – “Restyle, Recode, Reimagine with CSS3” by Dave Storey and Lea Verou, is the longest chapter in the book and it covers quite a bit of information. The ambitiousness of this chapter means that no one piece is covered in depth, but each topic introduced is presented with enough information to give you what you need without overwhelming readers – because, if expanded upon in depth, this one chapter and the topics presented in it could fill a book on their own!

I have already said that I recommend this book, so obviously I think it is well done, but that doesn’t mean it’s perfect. In the spirit of a balanced review, I want to not only praise the content and design of the book, but also point out where I think it could’ve been improved.

When I first heard that the “theme” of this new book was “Redesign the Web”, I was intrigued by the idea of various authors all contributing a chapter to a work that, as a whole, would cover the theme of a website redesign. The truth is that, in the final product, some of these chapters fit into this theme much better than others.

The first chapter in the book, “The Business Side of a Redesign” by Paul Boag, kicks things off in perfect fashion. It sets the stage for the rest of the book, while also presenting a compelling approach to considering whether a project is in need of a redesign or, perhaps, a realignment.

The second chapter, “Selecting a Platform: Technical Considerations for Your Redesign” by Rachel Andrew is an excellent follow up to the first chapter, even referencing topics covered in that first chapter on a number of occasions. Those references really allow these two chapters to work well together, rather than feeling like two chunks of content written separately without any knowledge of each other. Unfortunately, other chapters in the book do not work this well together.

Alone on an Island

While I think the editors have done a great job making the overall tone of the book consistent, there is still a sense that each chapter was written without a sense of the other chapters.

Chapters 1 and 2 work perfectly together, in part because the second chapter references the first and builds on what was covered previously. Other chapters do not do this, which means that you do not get as smooth a sense from one to the other like you do in these early chapters.

Ultimately, all the chapters work great on their own, but I would’ve loved to see more of a tie between each chapter.

The Order of Chapters

My only other criticism of the book is the order that the chapters are presented in. While the first few chapters cover the very beginnings of a “redesign” process, after those two, the topics seem a bit out of order to me.

The two final chapters in the book, “Workflow Redesigned: A Future Friendly Approach” by Stephan Hay and “Becoming Fabulously Flexible: Designing Atoms and Elements” by Andy Clarke, feel like they would work better if presented earlier, since the topics they cover really drill down to the overall workflow of a redesign process.

I find myself wanting to slice the chapter order of the book up a bit to present the topics in a flow more consistent with the way that a redesign project would go, with information on planning and workflow first, followed by design considerations and user experience, and finally development topics. Admittedly, my desire to see the topics presented in this order is a reflection of my own process, and not everyone may agree with that presentation, but I really do think it would help the overall flow of the book to present the chapters in more of a discovery > design > development order. 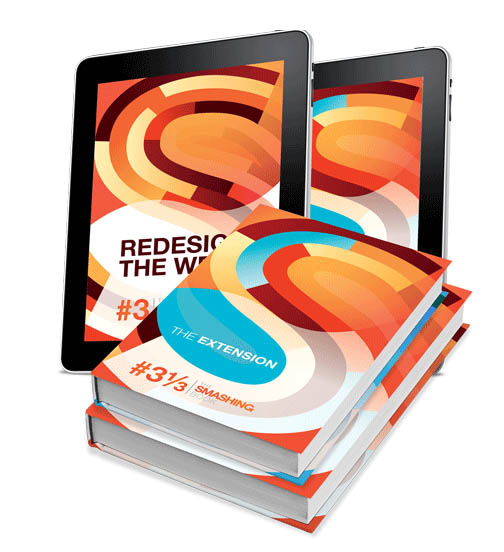 As I was reading through the pages of The Smashing Book #3, I took two sets of notes. The first set covered topics I wanted to highlight and comment on in my review. The second set of notes covered topics and ideas I wanted to present to the rest of my team to discuss changes in our own workflow or approach, fueled by the information in these pages. That's proof to me that not only is this a good book and an enjoyable read, but it is an important book that really can change the way we design, or redesign, for the web.

The Smashing Book #3: Redesign the Web, as well as the companion #3 1/2 edition, are both now available for purchase or download. You can learn more or order now at their site.