Robots Under The Tree - blog article by Jeremy Girard, Pumpkin-King.com

Robots Under The Tree

My son, Jacob, wants a robot for Christmas. He’s not looking for an action figure or a remote control toy - he wants an actual robot that he can command to do chores, bring him drinks, and generally serve as a robotic assistant.

Jacob first began asking for a robot after seeing last year’s "The Muppets" movie, in which Kermit has a robotic butler named "80s Robot". This character is essentially based on the Omnibot 2000, a toy robot released by Tomy in the mid-1980s. This is both a good thing and a bad thing. It is good because the thing he wants actually exists – kind of. The Omnibot 2000 is a toy, not a sentient robotic being, but it would still blow his mind if he found one under the Christmas tree. The bad news – a used Omnibot 2000 sells for hundreds of dollars and a brand new one would run into the thousands. That’s a bit more than I want to spend on a 30-year old toy that my kids are likely to break before the New Year arrives. 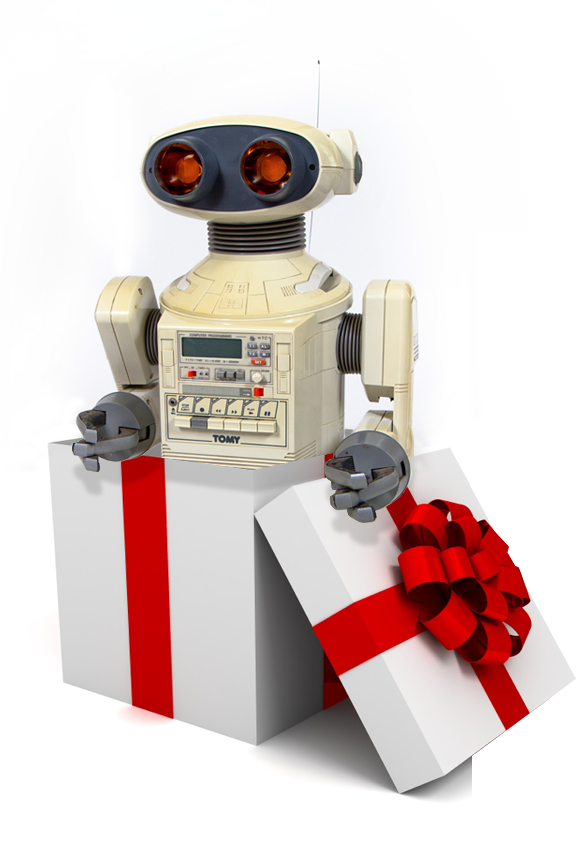 I have tried to explain to my son that they don't make this robot anymore, so I can’t buy him one at the store. His answer? “No problem, Dad! I’ll just ask Santa for one.”

This is the problem with Santa Claus – he can make anything. Since he builds all the toys in his North Pole workshop, a simple hurdle such as an item being out of production for three decades is no problem at all for the jolly old elf. Reinforcing this belief is the fact that, for the past two years, Santa has brought my son toys that were “vintage.” Two years ago, he asked Santa for a Transformers’ Optimus Prime toy, not a new one – but one “like Daddy had when he was a kid.” Last year, he asked for another old school Transformer, the space shuttle/dinosaur named Sky Lynx.

While both of these toys were, indeed, first released many years ago, they had both been re-released in the last few years, meaning you could find newly released versions of these vintage toys at a reasonable price. So, in a nutshell, Santa’s awesome gift-giving these past few years has cemented Jacob’s belief that he can ask him for anything.

So what do I do now to avoid a disappointing Christmas morning? It looks like it’s time for an exercise in setting appropriate expectations.

Setting appropriate expectations is one of the main things I do in my role as Director of Web Development for Envision. You see, just like my son believes that Santa can make him any toy, so do many clients believe that we can make their website do anything they can imagine.

The Web is an incredible place, and we certainly can do amazing things with websites. Yes, there are technical limitations of websites, but those are normally easy to discuss with a client. Technical limitations aside, however, there are really three barriers to consider when making promises on website projects:

Setting unrealistic expectations for web projects is often the by-product of not being honest about one, or more, of the barriers listed above. You may not set out to be dishonest with a client – in fact, in many cases, the person you are being dishonest with is yourself.

It is healthy to accept a job that provides a challenge. Taking this type of work is often how we learn and grow, but we must also know our limitations and when we are in over our head. Being honest means realizing when a job is a fit for you and when it is not.

Similarly, agreeing to do work for a budget or according to a timeline that is unrealistic is another surefire way to strain client relationships. If, from your experience, you know a project cannot be done as quickly or as cheaply as a client is asking for, then do not agree to those conditions - because when you agree to unrealistic requests, you set unrealistic expectations.

Taking On A Challenge

We’ve all been there before – taking on a project that was a real stretch of our strengths or one that was subject to a very challenging budget or timeline. There are times when taking these projects is the right choice. Maybe it is for a good cause or for an existing client whom you want to help out. Maybe it is just a really cool project that you are excited to be a part of or because it will provide you with a valuable learning experience. Whatever the reason may be, there are instances where these jobs makes sense for us – but we need to be mindful of the reason we took the job and honest about the challenges before us.

If we knowingly take a gig with an overly aggressive timeline, be up front about that with the client and explain how you will meet their deadlines – such as extra hours on nights and weekends, extra hands contributing to the project, etc. There are ways you can make it work, but Step 1 is discussing the challenge with the client so that they are aware of it.

The same holds true for budgets or capabilities. If you are taking on a project knowing that there is a significant challenge to overcome, be honest about it with yourself and your client. If you have an honest discussion about the situation and they still wish to proceed with you, then you kick off the engagement on the same page with everything on the table before you.

This Is Not A Free Pass

Now, this doesn’t mean you can’t deliver on your promises. If you take the work and the challenges it brings, be prepared to meet those challenges. Being honest doesn’t give you an excuse to fail. What it does instead is define those challenges and how they will be met. This can include items that are the client’s responsibility and which you must hold them to if you expect to succeed.

If the project is a success, being up front and honest about the challenges will ensure the client is aware of what you achieved for them. That kind of superhero-like achievement is a great way to build strong, long term client relationships.

On the flip side, if things do not go according to plan, and realize that when you take projects like this, there will be some challenges that you fail to meet, at least you were honest about those challenges at the onset, instead of promising them nothing but clear skies and smooth sailing.

So – back to my Christmas dilemma. While I am a big proponent of being honest with yourself and with clients, I am a little more flexible when it comes to telling a harmless fib to my kids – especially one that helps maintain the magic of Santa Claus. The simple reality is that Santa is not bringing Jacob an Omnibot 2000 this year. The reason? They broke the mold.

I explained to Jacob that Santa can, indeed, make just about anything in his toy shop. In the old days, most toys were made out of wood, so Santa and his elves simply chopped down some trees and whittled and carved away. Today’s toys, however, are often made of metal and plastic – which means they need molds to make the toys. Sadly, those molds break down over time and become unusable. This is what happened to the Omnibot 2000 mold – or so I told Jacob as a way of explaining why Santa would be unable to make him a robot assistant for Christmas this year.

His reaction? He simply shrugged and accepted that this would be a robot-free Christmas. Coming full circle on this story, Jacob then changed his Christmas list from the robot he saw in the Muppets movie, to wanting an actual Muppet instead. Now that I can do!

May your season be filled with robots and Muppets and holiday joy. Merry Christmas.